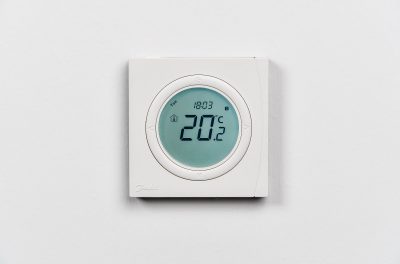 Gareth Ash, Marketing and Technical Support Manager at Danfoss, looks at why a growing number of domestic boiler and control manufacturers are adopting the OpenTherm communication protocol.
What is OpenTherm?
OpenTherm is a non-manufacturer dependent multi point-to-point system of communication between modulating HVAC appliances, such as domestic condensing boilers, and room thermostats. Essentially, it provides a standard set of rules for exchanging digital information between the appliance and room thermostat. This provides more precise modulating control on the boiler as opposed to basic On/Off commands. Modulating boiler output ensures closer, more accurate room temperature control, with less temperature fluctuation to optimise boiler efficiency and end-user comfort. The OpenTherm communication protocol allows the amount of heat provided by the boiler to be controlled to match the varying demand signal. By reducing the flow temperature to a minimum as it leaves the boiler, OpenTherm modulation helps improve boiler efficiency by running at lower flow temperatures for longer periods; this ensures more of the heat exchanger is at condensing temperatures.

Common standard
The efficiency benefits of modulating control are now widely recognised within the industry and this is reflected in the number of modulating heating appliances in the market. By providing a single, common standard for communication between such appliances and the controller, OpenTherm is gaining popularity among both boiler and control manufacturers. Unlike manufacturer-specific solutions, an open communications protocol minimises incompatibility issues between different parts of a domestic heating system. In the face of constantly evolving technology, OpenTherm provides a level of compatibility between key components, which is surely good news for anyone involved in choosing and installing a residential heating system.
In July 2019, The OpenTherm Association launched an initial three-year communication process to raise awareness of the protocol and its benefits to the heating industry as a whole. The Association has reported that a number of members have signed up to work with it to introduce a wider acceptance of OpenTherm as a standard in the UK. Current members include manufacturers of controlling devices, such as room thermostats, and burner automations, as well as a number of appliance manufacturers. The protocol is also said to have the support of two leading industry bodies, the Heating and Hotwater Industry Council (HHIC) and the British Electrotechnical and Allied Manufacturers Association (BEAMA).

Heating controls
As an active member of The OpenTherm Association, Danfoss is incorporating OpenTherm into a range of new heating control developments. Our TPOne range of programmable room thermostats, for example, now includes an OpenTherm variant, as does our recently introduced RET2000-OT thermostat. This type of modulating room thermostat provides modulating control of OpenTherm equipped condensing gas boilers, offering a speed of response to temperature changes that is significantly faster than traditional On/Off thermostats. As mentioned earlier, it also ensures that the flow temperature from the boiler is modulated to as low a level as the prevailing load permits, balancing economy with the desired comfort level. For ‘high load’ conditions a high water setpoint can be requested from the boiler. The water temperature being requested will then reduce over time as the room temperature approaches its target. The important difference is that the boiler will run for longer periods but producing water at lower temperatures, resulting in less gas being used and maximising the time spent in the higher efficiency condensing mode.
The importance of OpenTherm in optimising heating efficiency is supported by test results from a controlled laboratory environment. These indicate that savings in the order of 15% are achievable when comparing an OpenTherm boiler controlled by a modulating room thermostat with the same boiler controlled by a traditional mechanical On/Off thermostat.

Freedom of choice
One of the main benefits of basic On/Off controllers is that they can be easily swapped or upgraded at any time as they are not dependent on the type or brand of boiler. However, if homeowners are looking for greater efficiencies (and to satisfy increasingly stringent regulations) the advanced functionality of today’s more sophisticated devices will probably provide the best control options. Needless to say, if the system concerned uses a manufacturer-specific protocol it would limit the choice of replacement to controllers that use the same protocol. This restriction would no longer apply if manufacturers of domestic boilers and heating controls used a common standard communication protocol like OpenTherm. Their respective products would work together regardless of manufacturer, resulting in greater freedom of choice for all market participants. Gaining this level of compatibility would also make it easier to expand or adapt a system in the future.
Compatible future
Along with a growing number of companies and organisations in the heating industry, Danfoss recognises the many benefits of OpenTherm in the development of advanced, high efficiency heating controls. By working with heating appliance manufacturers we believe we can optimise these benefits, particularly in terms of modulating boiler output to provide the best level of comfort, the lowest level of energy consumption and carbon emissions. Supporting OpenTherm’s wider introduction here in the UK will also allow us to further develop this technology’s energy-saving potential and the advantages of greater system compatibility and future expansion possibilities.
For more information visit www.danfoss.com